It’s a principle my wife and I have taught our children from the time they were old enough to understand. Good actions = good consequences. Bad actions = bad consequences. It is also a principle I was taught. I remember having a curfew as a teenager. As long as I kept the curfew, my life was unfettered, and I continued life as normal. I remember a time I broke curfew. I knew the rule. I knew I broke the rule. I still remember my Mom informing me that as a consequence, I would be grounded for a period of time. I didn’t like the consequence, but I knew the risk because I knew the rule and the associated consequence that came with breaking the rule.

As I started raising my own children, I remember clearly when one of my children first participated on a soccer team. The team wasn’t very good, but my child had a fun time running, kicking, and, well, goofing off while on the team. After the six-game season, my child’s team had only won a couple games.

At the conclusion of the season, I was surprised to see my child receive a trophy. Not a first-place trophy. Not a second-place trophy. In fact, it was the same trophy all the children received, regardless of how well their team actually did in that short season.

As I participated in sports as a child, I remember very clearly being on good teams and bad teams. For many years I proudly stored the first-, and second-, and third-place trophies/awards I received. My team and I earned them. The trophies were a consequence of doing well. I also remember many years where I never received an award…the consequence of not doing well.

As my child was awarded a trophy after the soccer season, I couldn’t help but wonder what society was teaching my child. Everyone received the same consequence even though the actions varied greatly from one team to another. No wonder the younger generation is often referred to as the “trophy generation.”

When I approached the public recreation services group about the trophy, and asked why my child—and every participating child—received a trophy, the staff member warmly, and with a smile stated, “We don’t want any kids to feel bad if they didn’t do very well. So, everyone gets a trophy. That way they can feel good about their experience.” Her tone tried to coax from me a “what a wonderful thing to do” response from me.

That was not my response and she looked surprised when my non-verbal facial expressions said everything I was thinking—Are you crazy? Are you stupid? That’s the dumbest thing I’ve ever heard. 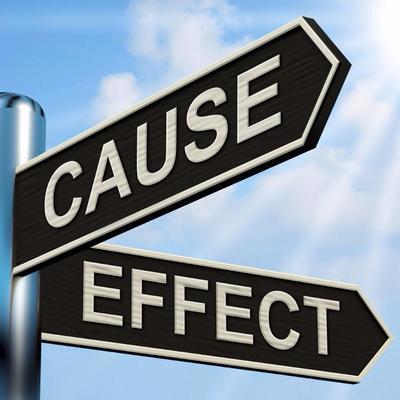 Fast forward many years to where my child attended junior high school and high school. Most every day I would inquire, “How is school going? Are you staying caught up? Did you do well on your test?”

Q: Are you staying caught up?
A: For the most part, but it really doesn’t matter if I turn in my work late or not. It doesn’t affect my grade.

Q: Did you do well on your test?
A: No, but it doesn’t really matter because I can take it again as many times as I want before my final grade.

My kids would comment on how old I am when I’d reply by saying, “When I was a kid…”

I’d share with them that when I was in school 100 years ago, if your assignment was late, I received a zero. If I did poorly on a test, you got bad grades. My poor action of being late or not studying sufficiently had a consequence of poor grades and more difficulty getting into college.

Society teaches our children that the consequence of their actions is that there are no consequences to their actions. Turn in work late? Do poorly on a test? The consequence is extended time to complete the assignment, and a chance to retake a test over and over until the desired grade was achieved.

These are but two scenarios—an athletic experience and school experience. There are plenty more. What are the results when children are taught unrealistic consequences of their actions? I argue we are starting to see exactly what those results are.

I see the movements against so-called social injustices. Professional athletes and many others protesting the National flag and anthem, protesting police shootings, and demanding societal reformation.

I will stand shoulder to shoulder in a fight against true inequality and unfair practices. I firmly agree with the words of Declaration of Independence as it states, “We hold these truths to be self-evident, that all men are created equal, that they are endowed by their Creator with certain unalienable Rights, that among these are Life, Liberty, and the pursuit of Happiness.”

The truth, however, is that law enforcement is not the problem. Those who say it is are misguided and are incompetent.

Protestors claim that black people are unfairly treated by police officers. I stress that I never want to see anyone shot and killed. I pray this will never happen, but I also understand the situation law enforcement faces when they must decide whether or not to deploy potentially lethal force.

Police shootings are not the problem; breaking the law is the problem. But in a society that is taught that consequences are not attached to action, people scream that REGARDLESS of the action, the consequence should not be attached to it.

This is not a popular viewpoint. Of course it’s not. It makes me a racist and and lacking empathy.

As a parent, I like when my child is happy and gets a trophy, even if they don’t deserve it. We have created a generation void of the principle of consequences of our actions. You do good, you reap good. You do bad, you reap good. That is what society teaches as truth. Society has created the monster. And now, society is reaping the consequences of its teaching.

My oldest child has now enrolled at the local university. Her first semester of classes could be considered very difficult. As she reviewed her courses with me, I reminded her that she was no longer in junior high school or high school. She no longer was part of a team where everyone received the same reward for doing well or not doing well. I told her college professors won’t care if her work is late or if she did poorly on a test. I reminded her of the importance of staying on track with her work and to study hard for every test. She is a smart kid, and her mother and I have taught her well. She understands life is not all rainbows and unicorns, that if she wants to succeed, she will need to earn it. She understands if she wants a successful consequence, her actions will need to reflect such and that nothing will just be given her because she participated.

But what about all the other children whose parents haven’t taught them this? What does society teach and what are the results of those teachings? All I can say is God help us and our society.