“The smell saturated my nostrils. I could taste skunk. I started spitting, trying to get the taste out of my mouth.”

“We caught something, but not a rat,” my wife said to me shortly after I woke up.

“What?  What did we catch?” I asked thinking of all the possible worst-case outcomes. “Our cat?” I questioned, having had a history of catching our cat in our live Havaheart trap.

For a minute I wasn’t quite sure what to say.

“A skunk! Are you serious? We caught a skunk. In the trap. In the barn?” I said not believing what I had heard. 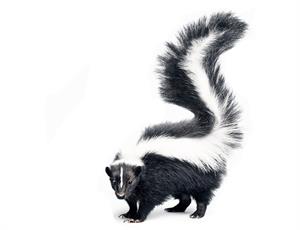 “Yep, and Jack is so excited to shoot it when he gets home from school,” Jen continued.

I had promised Jack he could shoot the rat when we caught it, and now, he appeared all the more excited to try his marksmanship with the larger nuisance animal. At this time my oldest daughter joined the conversation.

“I had to feed the horses so I sneaked around in the barn so I wouldn’t disturb the skunk. It is sooooo cute!” she said.

“You know it is going to die, right?” I said emphatically, not wanting her to get any wild ideas about keeping a skunk as a pet. I didn’t want her to get all sympathetic and sad when the time came to dispose of Mr. Stinky.

I admitted to them both that I wasn’t sure how to handle a skunk. Yes, growing up in Smallville, USA, I had my run in with all sorts of critters…porcupines, rabbits, birds of every shape and size, snakes, even a bobcat. But the only experience I had with a skunk was when my dog would get tangled with one. Never had I experienced actually managing a skunk, not to mention a living, breathing and fully armed/scented skunk.

My daughter quickly Googled what to do with a skunk and there were hundreds of videos and comments.

The first of the oh-so-many mistakes I made during this experience, was thinking Google was sure to be right. “Hold a towel or blanket from head to toe, hiding your body, while walking to the caged animal. The skunk will not spray a target it cannot see,” Google informed me. “Place the towel or blanket over the cage. The skunk will remain happy and you can then pick up the covered cage and take the animal to the place you desire,” Google continued.

That sounds easy, I thought. I watched a couple videos and everything looked like it went well. So, when I got home from work that evening, I thought this would be a very simple. I drove my truck to the barn, dropped the tailgate, and grabbed my beach towel.

Slowly approaching the barn, the pungent smell still filled the air from the surprising spray my cat encountered the night before. This was the first time I saw the actual skunk. Standing 30 feet away, my heart strings tugged a bit as I agreed with my daughter…it was a cute little thing. A little fluffy, pointed nosed critter, with beautiful black and white markings, I admit I decided I couldn’t possibly kill this creature.

Standing there I decided, I would pick up the cage, drive it away from the neighborhood, and let the bugger go.

By this time, my son and his friends were curious, and all wanted a look at the skunk. One of their moms also let her curiosity get the better of her and she made her way out to the barn. With all the commotion, the skunk realized something was going on and his docile nature turned to more of a startled and anxious state.

Slowly I walked toward the skunk, covered head to toe with my towel. I got 10 feet from the skunk and thought, “This is going quite well. I can’t believe I’m this close to the thing and it hasn’t sprayed.” I took three more baby steps and started slowly lowering the towel to the cage.

The bugger turned its hind end toward me and let it rip. The smell was unbearable, and I threw the towel at the cage and quickly retreated.

The smell saturated my nostrils. I could taste skunk. I started spitting, trying to get the taste out of my mouth. Everyone was laughing, or rather, rolling on the ground in hysterics.

My patience was drawing thin. I ordered everyone out of the barn claiming they were scaring the skunk and making it want to spray me. My feelings of “oh, what a cute little animal,” dissipated while the smell that saturated me didn’t.

Looking for a solution, I brilliantly came up with a new plan. Pick up the cage with the towel, drop the whole thing in a large water tub, and see how well the thing could breathe under water. So, I slowly made my way back over to the covered cage. The towel now stained with a yellow/light green spray mark. I lifted the cage while holding my breath and then quickly made my way to the water tub.

I sat the cage on the tub, only to realize, the cage was an inch too big and wouldn’t fit. I retreated again and took a deep breath to refill my lungs. Standing there, I reassessed my situation. Looking at the cage, I then looked over at my truck. I then decided to try my first plan and went back to the cage, picked it up, and slowly headed to my truck.

This second spraying was just as bad as the first. However, with my eyes watering and nostrils already burning from the first spray, this spray didn’t knock me over.

I placed the cage on the tailgate and headed down the road. I rolled all the windows down trying to catch my breath. I drove to the end of the street and planned to release the animal. I got out of the truck, and noticed the smell was stronger than ever. Apparently, the truck ride made the skunk upset and it sprayed again. I made my way around the back and slowly picked up the covered cage. I walked it a few feet away, by the side of the road, and then realized I didn’t know how to open the spring-loaded latch on the cage, hold it open, and wait for the animal to exit. I quickly found a bungee cord and hooked it on the cage door, and slowly opened the latch. I was almost home free. I was so impressed with myself. I raised the latch and stepped back, waiting for the skunk to leave. I waited. I waited longer. What was going on?

From my vantage point, I extended my arm as far as I could, while keeping the latch open, and I slowly crouched down to peer through the end of the cage. Nothing. I saw nothing.

I crouched further, almost lying on the ground. Nothing! The skunk was gone. I knew the skunk hadn’t left the trap. So where was it? I stood up. If the skunk wasn’t in the trap, and I know it was in the trap when put in on the truck. There was only one place it could be.

I walked around the back of the truck, just in time to see the skunk’s tail slowly disappear underneath my truck box, and to the side of a spare tire, lying under the truck box.

In my truck bed, I had a lot of stuff. A 30-hp outboard boat motor, strapped down, and standing up in the bed. I had three spare tires under my truck box, filling that small space almost completely (except the small nooks and crannies a skunk could fit in). I had paint cans, and other miscellaneous items. Everything stunk to high heaven.

Now I had a skunk, hiding in my truck and I had no way to get him out. The first step was to pull the spare tires out from underneath the truck box. So, I drove back home, a picked up a long stick.

I drove back down the road and slowly removed the spare tires. Now, as strategically as I possibly could, I tried shielding my body with the truck bed, and reached by arm over the top and ran the stick underneath the truck box. I poked. I prodded. And, I managed to pull him out from underneath.

I couldn’t see what I was doing, but using the stick, I felt the soft body of the varmint and I could hear him moving around. So, I peeked over the edge of the truck bed, and there he was, in all his glory.

Spraying number three! This time he got me and my truck good.

The vile and evil smell covered me from head to toe. It was unbearable and I started to dry heave. Cars were passing by and I’m sure they thought I’d lost my mind. I was bent over, on my knees, covered in skunk spray, and gagging uncontrollably.

As I regained my composure, I walked around the back of the truck again, and saw my disgusting counterpart crawl back under the truck box and placed himself so his hind end was pointing straight back, and his neck was cranked around so his vantage point was perfect to thwart any other attempt I made to dislodge him. With both his face and butt pointed toward me. I retreated back to the cab of my truck.

By this time, I was furious. I stunk to high hell. My truck reeked. And I was again driving back home, with a skunk in my trunk. No longer was I thinking about how to gently release this devil animal back into the wild. My once understanding demeanor had turned to rage. Being sprayed three times, I was no longer worried about smelling bad. All I wanted was to rid myself of this despicable demon.

I got home and grabbed my child’s pellet gun. I got back in my truck and headed down the road. Living in a suburb, I couldn’t just jump out and start shooting a gun, so I had to find an appropriate location. I drove from one location to the next, not knowing where perform the dirty deed. Twenty minutes later, I found myself on a dirt road, up a local canyon.

I jumped out and took aim. I was finally over.

The most surprising part of the whole ordeal was that when Mr. Stinky finally relinquished, there wasn’t any attempt to spray. Perhaps his stinker was empty by this time. Maybe, being covered from head to toe in skunk spray, I just couldn’t smell another attack.

I discarded the remains and got back in my truck. I drove home a little wiser that day and couldn’t help but laugh as I looked back at all the many mistakes I made over the course of three hours.

I drove directly to a car wash. As I started praying out the bed of the truck, the water hit the tuck bed and came straight back at me, now intermingled with skunk spray. What a fitting end to a terrible experience.

I finished washing my truck and then washed it again. I went home, and washed it a third time. It was no use.

Oh, the lessons you can learn living on a pseudo farm. You start out trying to catch a rat, and you end up covered in stink. I guess that’s just par for the farmer’s course.